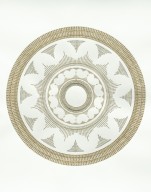 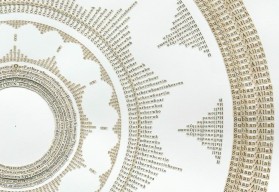 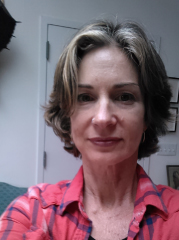 Meg Hitchcock’s studio is clean, bright, and filled with elegant framed works featuring thousands of letters cut from books and applied in new configurations. Some feature a mandala-like composition, others echo the shapes of tree branches. In each work, Hitchcock has cut letters from a sacred book of one religion to spell out a sacred passage from another religion. Letters from the Bible become a passage from the Koran; those from the Kabbalah become a Christian psalm. The overall design may emphasize an image or idea in the text, or add another message altogether.

Raised in an evangelical Christian household, the artist describes how her later exploration and study of world religions resulted in newfound respect for each, and especially a reverence for their sacred texts. The laborious process of hunting for and cutting each letter and then positioning it in its new context she equates to meditation.

I have a tremendous respect for other religions. Growing up as an evangelical Christian, I thought the Koran was evil. And as I’ve been reading it and digging into it, it’s really beautiful. And it makes me appreciate that there’s so much there.