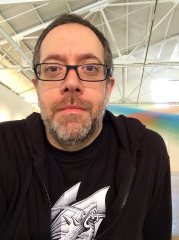 Gabriel Dawe’s installations of multicolored thread engage the eye and challenge our perception of space. At first, you may think you see a full spectrum of projected light: a rainbow of saturated hues shimmering on the walls and the floor. But as you approach, you begin to perceive that the color comes not from a projection, but from thousands of individual threads strung throughout the space. In an astounding, painstaking process, the artist uses miles of thread mounted between hooks in the walls and floor to create experiences of eye-popping color and form.

Dawe’s work in thread stems in part from his cultural background. The artist grew up watching his grandmother create hand embroidery, a traditionally feminine skill she passed on to her granddaughters but not her grandson. Feeling stymied, Dawe sought to explode the gender-bound tradition. He sees the structure of his installations as a metaphor for the social structures—and strictures—that often rule our everyday lives.

Hanging by a Thread: The Installation of Plexus No. 27

I grew up in Mexico City, and my mom’s family is fairly traditional. I wouldn’t even dare ask my grandmother to teach me [embroidery], because she was not supposed to. That became the start of a more serious exploration of this material. In a sense, all this work stems from working with textiles because of that trying to go against social constructs and gender identity.

LINDA DEBERRY:
Gabriel Dawe made this work specifically for Crystal Bridges, is that right?

ALEJO BENEDETTI:
That is correct.

LINDA DEBERRY:
And it debuted in the 2014 exhibition State of the Art. What can you tell us about Dawe and how he came to make this work for the space?

ALEJO BENEDETTI:
Yeah, so, Gabriel Dawe is a Dallas-based artist, and we first came in contact with him for State of the Art which was this big contemporary show that we did in 2014 and our thinking was, you know, great art is happening all across the US, it’s not just in New York and LA, and so we went to over a thousand artists’ studios. Gabriel Dawe was one of them, and his story is really pretty amazing in terms of how he got to making these massive installations. So he was born in Mexico, grew up there, and [short pause] he has this very vivid memory of going in and seeing his grandmother teaching his sister how to sew. [short pause] And he said, “Grandma, can you teach me how to do that?” and she said, “No that’s only for girls. Boys don’t learn how to sew,” and that always stuck with him. And by the time he got into college and he’s starting to think about, “Okay, how do I function as an artist? What’s really interesting to me?” He had that memory, and he said, “All right, well, if boys don’t sew, I’m still going to use all that material that I’m going to explode it out into real space. I’m going to take up tons of space with this thread.”