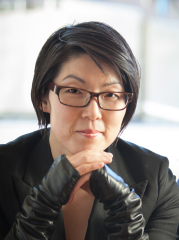 Seattle artist Susie J. Lee is adding a new dimension to the ancient art of portraiture. Lee has embarked upon a series of portraits based in time. She asks her subjects—workers in the oil and natural gas “fracking” industry in her native North Dakota—to sit silently for her video camera for up to 30 minutes at a time. The images she captures represent neither the fleeting, frozen moment of still photography, nor a painting’s static image created through long observation. Rather, each image becomes an act of observation. The video portraits offer up their subjects in all their human physicality: breaths, yawns, scratches, small adjustments, large movements, and everything in between.

The videos can cause you to feel uncomfortable—even voyeuristic. When that awkwardness has passed, the images also create a powerful awareness of shared humanity and empathy. Depths and layers of being that would be indiscernible at first glance begin to make their presence felt, leaving you with a sense that you have had a meaningful encounter with someone you now feel as if you know.

It’s really important for me to identify that these are individuals and not just some sort of iconic person. When you look at somebody in a portrait, and especially when it’s a video, there’s actually something very human and connecting about it.