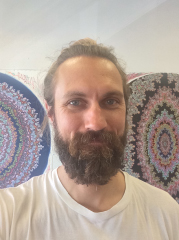 Kelsey Brookes’s paintings bring to mind the bright colors and pulsating graphics of the psychedelic culture of the 1960s, and for good reason. The works refer to a group of psychedelic compounds—including LSD, psilocybin, and mescaline—that share similar molecular structures to that of serotonin, the chemical in the brain that creates a sense of well-being and happiness.

Brookes began his career in chemistry and microbiology. He later transformed his life completely to become an artist, yet science is still very much part of his process. Brookes begins each painting by mapping out a diagram of a particular molecule on the canvas, then builds outward from the center point of each atom, randomly changing colors with every layer, until the entire canvas has become a bright abstraction. Creating the painting becomes, for the artist, a form of meditation, which is itself a means of triggering the production of serotonin and creating an altered state of mind.

A Biochemist Becomes an Artist