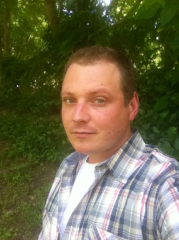 Guy W. Bell’s painting Cain and Abel centers on the conflict between two dogs: one black, one white, caught in the midst of a violent encounter on a dirt road. The white dog leaps at the black one, its muscles gleaming in the twilight glow. The black dog grips its attacker, tail erect and jaws agape. In the background, an ominous orange cloudbank echoes the overall form of the fighting dogs, implying an uncertain future. The paired headlights of a vehicle (given the rural setting, you could imagine a beat-up old truck) approach from the distant horizon, witness to a scene of mutual savagery.

Bell presents the narrative elements within his paintings in an open-ended way, allowing you to interpret them from your own perspective. Still, certain elements remain undeniable. The biblical reference in the title implies that the struggle at the core of this image relates to dualities of human experience: good and evil, black and white, life and death.

I think of painting as a psychological process: coming up with an idea in the subconscious, then putting that into a conscious form, which other people can interpret and understand. I want to be able to communicate what is unspoken. That’s why I paint.