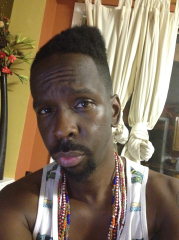 In this drawing from Fahamu Pecou’s Gravity series, a shirtless black male figure, arms raised as if hiding his face, barely fits within the frame. Three pairs of patterned underwear peek out from his sagging pants, a style worn by some young men. Though the shape of the body emerges through a controlled contour line, the artist has splashed an acrylic wash over the drawing to color the skin, resulting in bleeds and irregularities.

The birth of Pecou’s son caused him to reassess ideas of black masculinity and what he considers the “problematic performance of identity as portrayed through the media.” The idea of “gravity” assumes multiple meanings in Pecou’s work: not only the unseen force that tethers us to the earth, but also the force that drags down sagging pants—and the one that tightens the noose. “Gravity” also describes the magnitude of the situation, which Pecou insists that we face: how is the black male body represented today, and how are we implicated in that image?

An Expression of Gravity

I have a style that’s reminiscent of Muhammad Ali’s ‘rope-a-dope.’ He would pretend to be hurt, and as soon as you dropped your guard, that is when he would attack. The idea is that these images will be attractive and pull you in. It’s a lure, it’s a trap, it’s a way to bring you in and force you into a different kind of dialogue with the work.