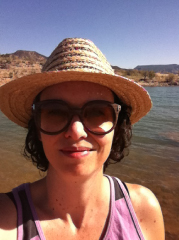 Although a photographer by practice, Aspen Mays utilizes her background in anthropology to explore humankind’s connections with various scientific phenomena and ephemeral lifetime events. She uses photography to investigate fleeting experiences, whether by trapping fireflies in the housing of a camera to capture their light or documenting every leaf on a tree over a single day.

In her two-part sculptural work Ships that Pass in the Night, Mays tracks each time a ship comes within viewing distance of another ship, anywhere in the world, using real-time, publicly available data. At each occurrence, a dot-matrix printer in the gallery records the coordinates of the two vessels. Simultaneously, a panel of lights facing the street illuminates, acting as a mysterious but wondrous beacon to passersby. The title’s reference to Henry Wadsworth Longfellow’s melancholic poem “Tales of a Wayside Inn” underlines the sense of loneliness and disconnection our modern digital culture sometimes provokes. But Mays proves that even ships alone in the widest oceans of the world can experience a glimmer of hope on the horizon.

A lot of my practice centers on an idea about looking. There’s always been a kind of investigation about what it means to be able to see something, or to use photography to try and see something or [capture] an experience of something.