What is that thing in the lower pond?? 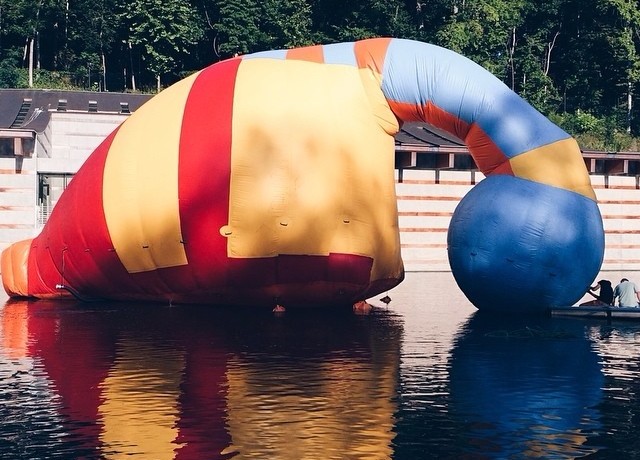 Our Guest Services team is hearing a lot of that question lately. You can’t blame guests for asking:  there is, after all, a big yellow, red, and blue…thing…afloat in the middle of the pond:

Well, that thing is a work of art by Cleveland, Ohio-based artist Jimmy Kuehnle, one of the artists included in State of the Art. The work is titled Amphibious Inflatable Suite (AIS) In Captivity. When fully inflated, it measures some 40 feet long and 15 feet tall. It is designed to undergo a regular cycle of “exercises” during which it will gradually deflate and sink below the surface of the pond, only to re-inflate and return to the surface some time later.

At least twice during the run of the exhibition, Kuehnle will visit Crystal Bridges to don the AIS and it out on a human-assisted land excursion. Yes, the AIS is truly, as the title implies, a suit, meant to be worn by a host human (the artist) who will wear and direct the work when it is on land. This is, clearly, no small endeavor, and it requires a little (okay, a lot) of help from viewers and bystanders along the way. This is absolutely essential because, as Kuehnle explained to me, the nearly-400 yards of fabric that went into making the AIS weighs an estimated 600 pounds by itself, not including the weight of the blower that keeps it inflated and the battery that keeps the blower going and—let us not forget—Jimmy himself, at the head of the thing, doggedly hauling it along.

Fortunately, the AIS, which Jimmy refers to as a “species,” is equipped with handles all along both sides that will allow onlookers to assist in its movement. For Kuehnle, this interaction with the audience is as much a part of the artwork as the object itself. While he was here installing the work, I talked to him for a short time about the AIS and his unusual approach to the viewers’ experience of art.

LD: Why is the aspect of interaction and collaboration so important to your work?

JK:  The joy has always been the struggle—in the figuring it out, the fiddling, the tinkering—with other people, and it never ceases to amaze me how emergent and spontaneous that behavior can be, even with complete strangers. People really want to come together and do stuff.

LD:  Have you ever made a work like this one before?

JK: I’ve had some that are similar in size and form, but never on water.  When I discovered that there was a very amenable type-one AIS in Arkansas, I emailed Chad (Alligood, Curator at Crystal Bridges) about my ideas to experiment with keeping them in captivity, and I got a permit for it and everything, and, well, I think it’s gonna work out.

LD:  There’s a definite playfulness to the AIS:  How important to you is the sense of fun?

LD: When you first talked with Crystal Bridges curators, you described yourself as someone who likes to break the rules.

JK:  Not necessarily breaking rules for the sake of breaking rules, but breaking rules for curiosity and finding out. My experience shows that if done properly and with consideration, most of the time that works out fine. For example, I don’t have parade permits for the inflatable suit performances I’ve done in the past, yet when I see police officers, most of the time they ask if they can help direct traffic. Never have I had a police officer say “do you have a permit” or “what are you doing,” they’re just concerned that everything is done safe, that everyone’s having a good time … and they’re curious. For the most part, if people identify with the struggle and they see you doing something like that, they think: “wow that person’s really trying to do that, that must be important to them. Hey! They look like me, they’re a person. Maybe I should think that’s important! Maybe I’ll help them out.” I think that’s a natural thought pattern that happens to people.

LD:  What kind of difficulties do you anticipate in moving the AIS out of the pond up onto land?

JK:  It’s going to a quite difficult experience. This is a new medium—working with a body of water—so it has lots of problems. Many of them were predicted (such as the air tubes filling with water), but since we predicted these problems we have solutions that we’re going to put into place to mediate them. Our current plan is to leave it in its inflate cycle until I’m there to implement possible fixes. Of course, having it in its inflate cycle isn’t terrible, it’s just that I’m concerned for the AIS’s bone density as it sits in the water without doing exercises, so I’m going to do whatever I can to provide it with that inflate-deflate exercise.

Now, getting it in and out of the water—again, we have problems that we imagine may happen, but there are many problems that we don’t know. It will be difficult mainly because of the weight of the fabric—and there are those stainless steel bollards—those will be difficult to get over. But never underestimate the emergent behavior of non-host humans when they see such a large colorful object that is just beckoning to be moved. And since the AISs have evolved handles to facilitate this type of collaboration and symbiotic relationship with non-host humans, I think that everyone will be able to grab handles in its inflated state and kind of roll it over the bollards, and we’ll take it from there. It’s uncharted territory.

Shouting to the World: An Interview with Randy Regier

Ships that Pass in the Night: “State of the Art” In Downtown Bentonville