Travels with State of the Art: Cobi Moules in the Great American Landscape 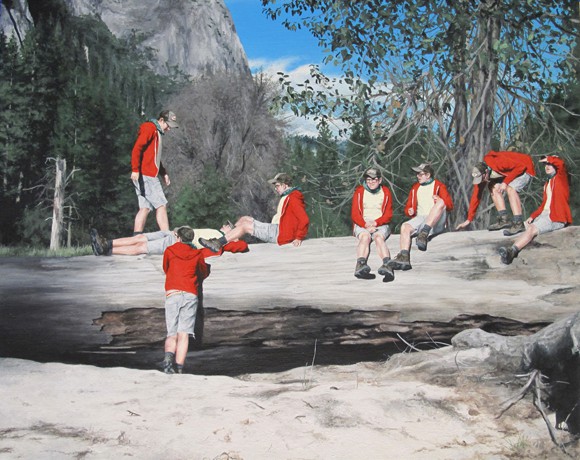 Nature has had many different symbolic meanings over time. From the embodiment of threatening, unfettered savagery to the pure manifestation of the glory of God, landscape has played many roles in American art and literature. One of the high points of American landscape was during the early nineteenth century, when the Hudson River School artists created romantic, sweeping vistas of mountains, forests and waterways as a symbol of the land’s largess and the overall excellence of America the Beautiful.

In their travels around the country, researching contemporary artists for the upcoming exhibition State of the Art: Discovering American Art Now, Crystal Bridges President Don Bacigalupi and Assistant Curator Chad Alligood have encountered a number of artists who are carrying forward the traditions of the American landscape in varied ways. Among them is Boston artist Cobi Moules, whose recent work deliberately harks back to the American landscape tradition of the Hudson River School, but with a modern and very personal twist.

Following a three-month solo trip across the United States to visit a number of national parks and iconic American landscapes, Moules began making a series of paintings in which he featured multiple images of himself in the natural settings. Though the landscapes are rendered with gorgeous attention to detail, they become backdrops to the self-portraits in the foreground: all dressed identically, exploring the scene with all the reverence of seventh-graders on a field trip.

Moules, who grew up transgendered in a Christian setting where his identity was at odds with the surrounding culture, considers his work a way of “renegotiating” his relationship with the ideas of gender, identity, and Christian faith.

“I had been looking at the Hudson River School painters quite significantly and thinking about the relationship between the individual and the landscape,” Moules explained. “ [I was exploring] these ideas of the people [in the Hudson River School paintings] being very tiny, and having the landscape being very overwhelming as a manifestation of God….By placing myself in such a mass quantity in these spaces, [I’m] trying to shift the landscape’s weight a little bit and allowing these [paintings] to become this playground where I’m exploring myself in it, exploring the landscape, becoming part of nature.”

The work underscores our changing relationships to both the natural world and religion, as the one becomes increasingly more accessible and comprehensible and the other perhaps less so.

In this week’s Huffington Post blog, Crystal Bridges President Don Bacigalupi shares a short video discussion with Cobi Moules as he talks about nature and identity.

Notes From the Road: Boston

Notes From the Road: Phoenix