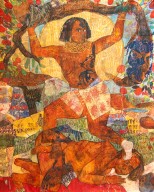 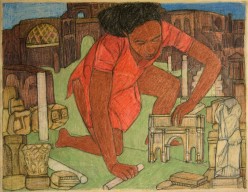 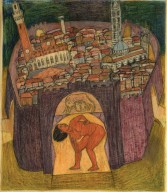 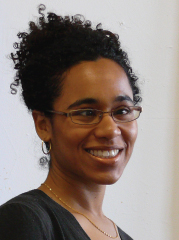 In her multilayered drawing and painting practice, Mequitta Ahuja casts herself in the guise of mythic warriors, epic heroes, and power figures descending from traditions across cultures. In a practice she has deemed “automythography,” the artist combines aspects of real imagery with invented characters and settings, consolidating her own feminine power as both the subject and the creator of the image.

Such  power emerges in works like Mocoonama, in which the central figure—a self-portrait—strikes a triumphant pose over those who would challenge her authority. The archetypal figures in her work indicate the artist’s investment in her own cultural background as an Indian American and African American woman. Ahuja’s intricate process begins with photographs of herself performing in front of the camera. Using these captured moments as inspiration, she then builds the surface of the painting with marks, patterning, and stamping, weaving a ground as integral and forceful as the protagonist at the picture’s center.

I’m thinking of the ground as a cultural space. Instead of starting with the plain page, I’m starting it with this layer of culture so that when I’m building my imagery, it’s really a wrestle between the figure and the ground. In the end, there’s this integrated, stitched-together element between them.