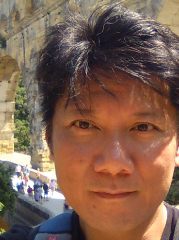 Jawshing Arthur Liou trained as a journalist before emigrating from his native Taiwan to the United States. Studying photography with the renowned Jerry Uelsmann, Liou’s work became more personal and organic, and his practice came to incorporate video. These works often stitch together multiple shots or image composites utilizing advanced computer and video technologies.

In Kora, Liou documents his pilgrimage to Mount Kailash, a Tibetan mountain that is sacred in four world religions (Buddhism, Hinduism, Jainism, and Bon). For Liou, the quest was a search for sanctuary following the death of his young daughter Vivian from leukemia in 2007. He recorded the journey on an ultra-high definition 4K camera and scored the work with an acoustic soundtrack to heighten the dramatic arc of the trek. Focusing solely on the path ahead, the video mimics the otherworldly quality of Liou’s journey, with its startling and ever-changing vistas. The viewer cannot help but be mesmerized by the slow, steady excursion around the sacred mountain to a pass strewn with colorful prayer flags—evidence of the spiritual quests of thousands of pilgrims before.

My work is very personal. The footage is a first-person walking experience. It follows the trail chronologically. The Tibetans worship mountain passes, so this is a sacred place. This is the highest mountain pass and most sacred trail. People bring the prayer flags and they become like an ocean as far as your eye can see.