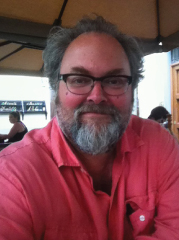 The large-scale paintings in Jamie Adams’s Niagara series emphasize the female figure within the charged environment of Niagara Falls. The artist calls upon both cinematic and art historical precedents to inform his imagery. In niagaradown, seven figures appear crowded together in the foreground as if marooned from Théodore Géricault’s familiar painting Raft of the Medusa. The various figure types twist and stretch as if in search of the narrative to which they belong.

The image of the cascading Niagara Falls in the distance points to both iconic representations of the falls in American art history (such as Frederic Edwin Church’s 1857 painting), as well  as to touchstones of American cinematic culture (the Marilyn Monroe film Niagara of nearly 100 years later). In such images, the artist asks us to question the relationship between high and low culture, figure and ground, nature and representation.

With this series, I was really influenced by my time in Florence. I was struck by the sculpture in the Bargello, especially Michelangelo’s Bacchus. What struck me was this subtlety of mixed gender. There’s a quasi-male figure, but at every turn roundness is accentuated.