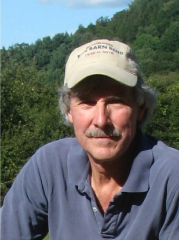 Dumbstruck by the virtuosity of the seventeenth-century Dutch-British woodcarver Grinling Gibbons, the young David Esterly dedicated himself to learning the art of carving wood. His choice was validated when he was commissioned to create the replacement for a work by Gibbons destroyed in the 1986 fire at Hampton Court.

In Quodlibet #1, Esterly recreates the form of a “letter rack” painting, a nineteenth-century tradition favored by American artists such as John F. Peto and William M. Harnett. A kind of wall-bound scrapbook, the letter rack’s straps hold a variety of objects according to the whims of the user. Esterly’s carving includes such twenty-first-century devices as an iPhone and a digital camera. A curtain obscuring the right side of the composition seems poised to close at the tug of a rope, suggesting the impermanence of all things.

It seems to me that these straps are like the unavoidable permanent qualities of life—birth, death, body, mind, pleasure, pain— and then in those permanencies, we stuff our little impermanent biographical things.