0
By Linda Deberry Posted on September 8, 2014 in CBMAA Blog 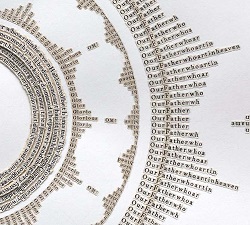 Today we celebrate great works of art in Crystal Bridges’ collection that relate to books and reading, and we also offer a couple of sneak peeks at works in the upcoming exhibition State of the Art: Discovering American Art Now with a literary theme.

As early as colonial times, images of books in portraits were symbols of the subject’s education and social status.  Ladies in particular were often pictured with books to indicate that they were educated, accomplished, and genteel. There are several such images in the Museum’s Nineteenth Century Art Galleries, including James Peale, Sr.’s portrait of the ladies of the Ramsay-Polk Family, ca. 1793.

In Edward Dalton Marchant’s family portrait of Samuel Beals Thomas and his wife and daughters, the artist has associated all three ladies with the gentle pastimes of reading and letter-writing.  The mother uses a finger to hold her place in a book, the younger daughter holds an open letter, and the older daughter has a book and sewing materials both ready at her elbow.

Mary Cassatt’s The Reader is one of the most familiar works in Crystal Bridges’ collection. Cassatt could be outspoken in her opinions, and advocated for women’s right to vote, as well as for the importance of education and social engagement for women.

Woman Reading, By Will Barnet, is another painting focusing on women and books, albeit in a very different style than Cassatt’s Impressionistic take on the subject. This painting is a portrait of the artist’s wife Elena.

There are several works from the upcoming exhibition State of the Art that relate in one way or another to book and literature. Two of them are already on view near the Bentonville Square.

Aspen Mays’s installation Ships That Pass in the Night draws its title and central motivating idea from a poem by Henry Wadsworth Longfellow (“Tales of a Wayside Inn”).

Nearby is Randy Regier’s NuPenny’s Last Stand, a mysterious faux toystore in which all the toys have been designed and fabricated by the artist.  In an interview, Regier revealed that the work, and everything inside it, is based on works of literature or music:

“Each piece in Nupenny has a reference point to a poem, a song lyric, or a literary work that’s moved me. The pieces in NuPenny have been about Jackson Brown songs, Philip Levine poems, and William Stafford, Amy Mann, and even Rage Against the Machine, Cervantes, but that’s not something I expect somebody to know looking in the window at it. It was important to me to follow each piece through, that I would hook them to a lyric or a poem or a story that moved me, it gave me the sense to know when I completed the piece.”

There are works inside the State of the Art galleries that also have literary themes.  No spoilers here, just a couple of hints of the diversity of works in the exhibition:

There are many ways of marrying words and images.  Literacy not only opens doors to the world, it also often opens windows into the world of visual art!

Art for the Birds: A Conversation with Calder Kamin