Donald Judd’s Specific Objects and the Art of Installation 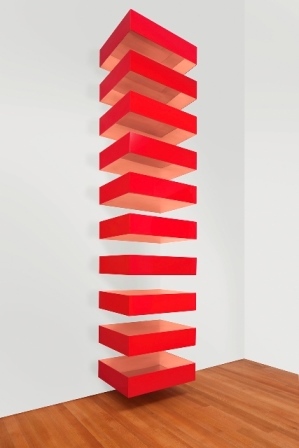 Now that we’re a generation or two into the so-called post-Modern era, it may be difficult to remember or recreate the circumstances in which High Modernist art reigned supreme. We live now in permissive times — art historically speaking — when any and all art-making approaches are potentially viable, especially so if they riff on, reuse, or recycle the past. And so to be confronted with a monumental example of Minimalist art may be jarring.

Donald Judd’s Untitled, 1989 (Bernstein 89-24) made its debut at Crystal Bridges this month, and it will undoubtedly raise some questions. What could have prompted the creation of such a startlingly minimal work of art? At 15 feet tall, the sculpture dominates its space, and yet yields little of its secrets. There is no evidence of the hand of the artist, no reference to anything represented, no expressivity to be perceived.

Judd called these mature works “specific objects” rather than sculptures or works of art, to indicate their distance from traditional ways of making sculptural art. These were “specific” because the artist carefully orchestrated their shape, scale, proportions, and materiality. And they were “objects” because they were fabricated — rather than sculpted — by the artist.

Ten identical boxy forms are arranged in vertical fashion — one above the other — with the spaces between each equivalent to the height of each box. The alternating of solid and negative space therefore creates a pleasing rhythm, while the enormity of the assembly dwarfs the viewer.

From the series that came to be known as “stacks,” Crystal Bridges‘ Untitled, 1989 (Bernstein 89-24) looms large both literally and figuratively. Its gleaming red Plexiglas facades and highly polished copper tops and bottoms dazzle with their brilliance, and their reflections enliven the space that surrounds them.

While it may be harder to recreate the context in which works such as this first came to prominence, it is still easy to be carried away by their precise and understated beauty. Take a look at this “specific object” being installed in our 20th century gallery and see for yourself.