Come On In! A Conversation with Danial Nord 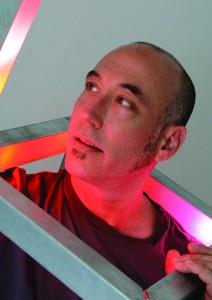 San Pedro, California-based artist Danial Nord has been at Crystal Bridges this week, installing his audio-visual sculptural installation titled, coincidentally, State of the Art. The work is alive with sound and light, and was constructed from the discarded back panels of old CRT televisions. To avoid spoilers, I won’t tell you much more than that, except to say that there’s a television theme song involved, and something of a surprise for viewers in the form of the sculpture itself.

Nord has a long background in commercial television and video, and brings all of the skills he learned in that industry to his video-based artworks. I sat down with him over lunch to talk with him about the work and his thoughts about the exhibition.

LD: What did you think about this exhibition when our curators talked with you about it?

DN: At first, I hadn’t heard about Crystal Bridges, but then my parents said “Oh, we read a really good article about Crystal Bridges.” And then everybody I talked to said “Oh, I saw them on CBS Sunday Morning” or something. So I did my research. I thought it was kind of amazing that a museum of this caliber would be at the foot of the Ozarks and open for free, which is kind of a big deal because a lot of people wouldn’t come, maybe, if they had to pay $15. It’s open long hours, it’s free, and it’s a top-tier collection of work. For that to be accessible in a region where there really wasn’t a major museum like this seemed to me to be a pretty good thing. On top of that, to try to bring in? a really interesting cross-section of American artists is a kind of doubling that in a way because contemporary art can be more challenging for audiences that aren’t used to looking at it.

LD: Why are you so fascinated with video?

DN: To watch something in a little rectangle moving around with a story is only a tiny aspect of what video is. Video is moving pixels of light and color. We use the medium like we use our brains: we only use a tiny portion of the medium. I’m really interested in the peripheral aspects of media and video, like what you see when you walk by someone’s house and they‘re watching their big flat screen with the curtains drawn. You’re seeing this amazing light and there are people inside—it makes you more interested. I don’t care that there’s a football game on when I see that, I care that there’s this life force, this thing happening inside.

Danial Nord installing his artwork “State of the Art.”

LD: Can you talk a little bit about this particular work?

DN: With my work I always try to make sure that there’s a way in. I’m not interested in tricking people and playing some game with them. I think that the approachability of this work, the way in, is the [television] theme song that everyone recognizes. Then often they look at this pile of junk, this black thing, and they’ll hear the music and they’ll be looking at it and then they’ll go “Oh my God!”

LD: This work draws on an aspect of association and nostalgia. Is that important as well?

DN: Absolutely! That, to me, is the anchor of the way in. I’m trying to say “You know this”—right up front: “Come on in, this is totally familiar.” So immediately they’re engaged—and they’re also confused.

LD: Is that confusion something you’re going for?

DN: I think walking that line of “Come on in!” and “What going on here?!” is exactly where I want to be.

LD: What’s the benefit of that for a viewer?

You will be able to see Danial’s work for yourself in State of the Art: Discovering American Art Now, opening at Crystal Bridges September 13.

State of the Art: The Transformation Has Begun

Members Get a Feel for The State of the Art in L.A.