Celebrate Hispanic Heritage Month with State of the Art 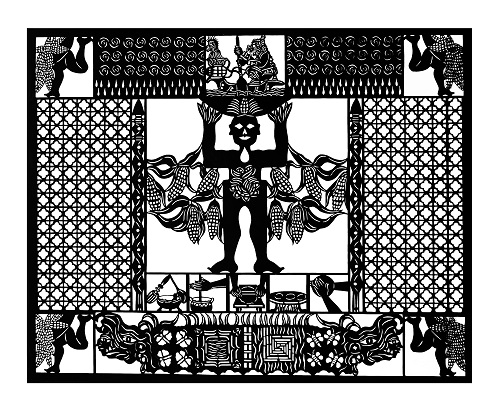 September is national Hispanic Heritage Month! Visit the current exhibition State of the Art: Discovering American Art Now and see how several Hispanic artists from across the country are celebrating their heritage, contemplating issues, and sparking conversations with their art.  Here are three:

Catalina Delgado-Trunk uses traditional papel picado (cut paper) methods to create intricate artworks that draw upon her ancient Mexican heritage. Here she represents the Mesoamerican “Lord of Corn.” Corn and chile have been staples of the Mexican diet for hundreds of years, so naturally corn is an important part of the culture. In the Mayan tradition, the gods mixed their own blood into corn flour to create humankind. “I grew up in Mexico in the ’40s and ’50s when we were rediscovering our roots. We, as immigrants, come with three things: language, food, and culture. That’s the richness of the United States. A lot of it is trying to explain who I am as  a Mexican.”

Michael Menchaca also draws upon ancient Mesoamerican stories to create his graphic works and video.  By blending together pop images with iconography reminiscent of the Borgia Codex, an illustrated manuscript from southern Mexico that was created before the arrival of the Spanish, Menchaca creates a modern day reinterpretation of old stories and historical events, with modern Mexican migrants cast as the heroes. “A string of events led me to feel increasingly racialized … which led me to do some research on my cultural heritage. I want the line quality [in the work] to reference Mesoamerican codeces, but also mixing that up with cartoons that I’ve been growing up with, thinking about how to give new life to these old forms and how they read in contemporary 21st century.”  –Michael Menchaca

Vincent Valdez more directly addresses the issues of racial conflict in the US.  His series The Strangest Fruit pictures modern Mexican -American men in the posture of hanged bodies, their limbs seemingly bound, heads bowed, hovering in an empty space.  The work refers to the largely unknown history of the routine lynching of Mexican and Mexican-American men in Texas in the early part of the 20th century, right through the 1930s.  The fact that the figures in these works are modern speaks to the continuation of prejudice and hate-crimes against Mexican Americans today.

“It’s very important to me that they’re modern. It’s the idea of in America the noose has evolved into various ways. It’s not longer a rope over a tree, it’s a slow death of incarceration, drug wars, combat wars, poverty, lack of education, racial profiling, etc.” –Vincent Valdez

State of the Art in Your Pocket!