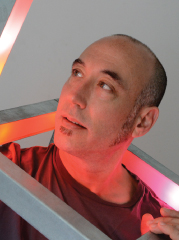 After years of working in the field of commercial television production, Danial Nord has a substantial tool kit of technical capabilities at his disposal. He now deploys these skills in the making of large-scale works of art, often incorporating sculptural forms and video imagery.

For State of the Art, Nord sculpted an enormous reclining Mickey Mouse from cast-off television backs. In a darkened room, the giant lies slumbering, his pose modeled from the homeless people Nord encountered around his Southern California studio. From within the sculpture, light and sound (from the remixed “Mickey Mouse Club” theme song) slice through the ventilation slits in its skin.

I’m trying to reach beyond the box. I’m interested in what video can do that’s not representation and not narrative. I’m also interested in the peripheral aspects of video—environmental and sociological aspects—where is it going? What are we doing with all of these electronics?