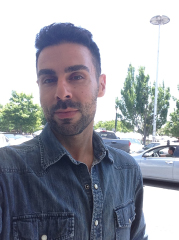 In his work, Ala Ebtekar juxtaposes the aesthetics of his Persian heritage with his American fascination with science fiction and the cosmos. Under Ebtekar’s skillful hand, the Persian archway—traditional symbol of the duality of earthly and divine existence—represents science fiction’s invitation to explore an infinite universe. It also serves as a portal between the artist’s very different cultural worlds.

A former member of artist Tim Rollins’s Kids of Survival (KOS) group, Ebtekar often incorporates printed material in his work. Fantastic Voyage is painted on the back of an original poster for the 1966 film of the same title. With the use of a light box, the work exists within two realms. When the light is off, the viewer experiences classical Persian designs portraying a portal to a peaceful universe. When the light is turned on, a “transformational vortex” is opened and the viewer is invited into a fantastical adventure.

I’m interested in the kitsch in the cosmic truth, and how these two can possibly meet. I think in my work they do meet.