Let’s Talk About It: the State of the Art Symposium

I was pretty floored when I heard from our curators that they were going rogue in developing their next exhibition by traveling cross-country to get to know artists in their studios.

Why would such an idea be so shocking to me? I think in part we’ve become conditioned that establishments such as museums often define art based upon the valuing of art auctions, private collections, and biennials. So it was refreshing to see curators take action and say to the establishment “Let’s be authentic and hear from the artists on what is art!”

Fast forward to the exhibition that evolved from that effort, State of the Art: Discovering American Art Now, which features more than 220 artworks, 102 artists from all across the US, not just New York and LA.  This exhibition goes beyond just the number of objects and the names. To me, it is actually a journey for the viewers and for the artists to be amongst each other as they explore a spectrum of art mediums and offer up their opinions on current society.

Given the depth of this exhibition, we museum educators couldn’t wait to capture this moment by offering the State of the Art Symposium, Crystal Bridges’ first public symposium, on November 14 and 15.  We’re very pleased that 14 State of the Art artists have accepted our invitation to share their thoughts on what is important to them in their everyday environments—from nature, to home life, to the community.

The State of the Art exhibition is the first of its kind for Crystal Bridges, and probably in the world. It has certainly set a precedent in exhibition research, and made a clear statement that Crystal Bridges is determined to connect with people and places nationally. This public symposium serves as a link between what’s happening nationally to what’s happening locally.

You may not know it, but there are tons of people in Northwest Arkansas (all around you, if you live nearby) that are doing pretty cool art shows, making art, helping the community, and advocating to support the arts in schools and on the streets.  Here are a few examples:

If you are interested in the arts and culture in our community, I encourage you to join us for our inaugural public symposium. Of special interest is the Open Platform session (from 10:30 a.m. to 12:30 p.m. on November 15) that showcases local perspectives from artists and art organizers in the region, as well as several artists from around the nation whose work appears in State of the Art. This session includes discussion and debate on the “state of art” in NWA and where we envision our community’s future.  This is a great opportunity to network and dialogue with other creatives in the area and across the nation!

Here’s a sneak peek at some of the regional participants in NWA session, with a special thanks to the very savvy Executive Director Samantha Sigmon from the Fayetteville Underground.

Ben Flowers received an Artosphere Partner Grant for his Envirofountains: place-based ecological sculptures. He is now working on Backrub, a series of collaborative public installations and participatory events at the DIY venue Backspace. Flowers also volunteers his time as a board member at the Fayetteville Art Alliance.

Kat Wilson is an Arkansas-based photographer as well as a co-founder and co-director of Bottle Rocket Gallery in Fayetteville, Arkansas. A non-profit gallery, Bottle Rocket shows artists from outside Arkansas whose work can be described as controversial, confrontational, or in some way challenging for the viewer. The mission of Bottle Rocket Gallery is simple—to create access for people in Northwest Arkansas to see the work of artists whose work, although important, would not otherwise be shown in this area.

Sabine Schmidt is an award-winning photographer, writer, literary translator, and educator. Schmidt serves as president of the board of Fayetteville Underground, is past vice president of Art Amiss, and is a member of the Kansas City Artists Coalition, the Arkansas Arts Council Artist Registry, the Arkansas State Committee Registry of the National Museum of Women in the Arts, and the Eureka Springs Artists Registry.

Eve Smith is the Director of Visual Arts at the Arts Center of the Ozarks in Springdale, Arkansas. She has a degree in studio art from the University of Arkansas. Smith is listed in the National Museum of Women in the Arts Registry, co-curator of Sensory Iconoclasts (a partnership with Arts Center of the Ozarks and Crystal Bridges), and is an arts educator with students as young as 18 months of age.

Dayton Castleman is an Arkansas-based artist, educator, and curator. He currently manages 21c Museum Hotel in Bentonville, where he lives with his wife and their three children. Castleman has participated in collaborative projects and studio spaces with other contemporary artists in Philadelphia and Chicago, and occasionally curates exhibitions out of his home.

Sam King is an artist/musician from Fort Smith, Arkansas. King co-edits MW Capacity, a website devoted primarily to painting in the Midwest, and co-directs Lalaland, a DIY arts and music space. King’s work is exhibited nationally and regionally. He resides in Fayetteville, AR, where he serves as Assistant Professor for the University of Arkansas Department of Art.

Samantha Sigmon is currently the Executive Director of the Fayetteville Art Alliance (known as the Fayetteville Underground), a regional artist-centered non-profit. She also directs a collaborative DIY arts and music venue in downtown Fayetteville called Backspace, is a board member of the New Design School, and serves on several art and local business committees. 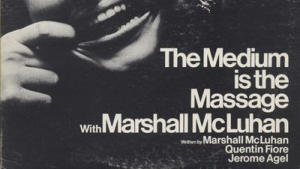 “The medium is the massage. Any understanding of social and cultural change is impossible without knowledge of the way media work as environments. All media are extensions of some human faculty – psychic or physical.”

These words were written by media theorist Marshall McLuhan, whose popularity exploded in the late 1960s for his exploration of how numerous media “massage” human perception of reality and our senses. Just as McLuhan was exploring media’s effect on humans, so too were artists looking to get away from the popular Abstract Expressionist painting movement and reinvent themselves through experimentation with the creative and spontaneous form of performance. For a visual artist, performance could offer direct physical impacts between the viewer and the artist—for example, a trending group at the time, Fluxus, held “Happenings” events by Yoko Ono, Nam Jun Paik, Claes Oldenburg, Robert Rauschenberg, and Carolee Schneeman.

(Read a recent article in The Guardian newspaper about Eye/Body, the controversial series by Carolee Schneeman, now 73). To these artists performance meant that they were both the image and the image-maker.

In State of the Art you’ll find a multitude of art mediums used by current artists who are pushing the boundaries of how a medium can affect our senses and perception. What our guests may not know is that several of these artists are using performance as their medium, as well. On October 11, Crystal Bridges’ popular Art Night Out event presents Action/Interaction, during which four performance artists will move between being the image and the image-maker, using psychology, their bodies, and relationship-building with other people as their interactive “paintbrush” of choice. Below is a listing of the performances scheduled for the evening:  as the viewer, you can decide which medium will be your massage?

Artist Wilmer Wilson IV will perform From My Paper Bag Colored Heart in the Great Hall from 8:15 to 10:45 p.m. The work refers to the “brown paper bag test”—a practice used by African American social societies in the early 1900s to determine if a potential member was light-skinned enough to be accepted. Those whose skin was darker than a brown paper bag were deemed inadmissible. In the artist’s view, this form of “colorism” is still happening today. (Notice: this performance involves nudity. Appropriate signage will be posted outside the area prior to the performance.)

Artist Angela Ellsworth will perform Stand Back in the Twentieth Century Gallery Bridge from 9 to 10 p.m. In this performance, Ellsworth, dressed in the traditional “sister-wife” dress of the Mormon church, will perform atop a pedestal with a backdrop of clouds, representing heaven. For Ellsworth, who grew up in the Mormon faith, this performance questions the equality of Mormon women and their right to heaven. The performance will be accompanied by local a cappella singers performing “Stand Back” by Stevie Nicks.

Artist Autumn Knight will be waiting quietly in the outdoor courtyard housing Jenny Holzer’s Venice Installation to offer guests personal performances of her intervention work I Propose that We. Knight will be available to meet the entire evening: 8 to 11 p.m.

Artist Jimmy Kuehnle has been eagerly awaiting the opportunity to release one of his Amphibious Inflatable Suits into the Crystal Bridges environment for some “non-host human interaction,” relying on guests at the event to assist in maneuvering the artist through obstacles. Kuehnle will periodically exercise his creatures between 9 and 11 p.m. DJ Abboriginal will provide accompanying sounds of aquatic, spatial beats.

In addition to the four performances, Art Night Out Action/Interaction will offer other ways of experiment with art in real-time throughout the evening. These include Works Progress’s Water Bar where guests can sample locally sourced waters from different locations. Accompanying the Water Bar will be the folk duo Still on The Hill performing their Once-A-River project.  Guests are encouraged to chat with local moms at artist Andy DuCett’s Mom Booth, or go to the South Lobby and make bird mobiles with State of the Art artist Calder Kamin. Finally, The Artist’s Laboratory Theatre of Fayetteville will be provide a cool-off lounge offering secret games and playful conversation.